There are frequent debates in our workshops about whether the time andÂ effort spent on building a Facebook marketing or brand experience is worth it. Is it really positive when it comes to return on investment? 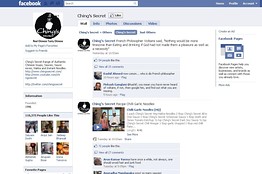 Let me walk you through an interesting example of an ROI evaluation of an Indian brandâ€™s community on Facebook. Chingâ€™s Secretâ€™s Facebook community has around 120,000 fans.

According to Ajaay Gupta, chairman and managing director of Capital Foods Ltd., the brand owner of Chingâ€™s Secret, Smith and Jones and Raji brands, this is how he compares the ROI of its community on Facebook with the ROI of advertising in print:

2. The OTS of any message posted by an administrator of Chingâ€™s Secretâ€™s community on Facebook is 18,000,000 (120,000 multiplied by 150, an average number of connections on a Facebook user page). Surely, this number is theoretical and will never happen. However, to whatever fraction you may want to discount this number, the final number of people who will see the message will still be much larger than the reach of an advertisement in print.

But the real ROI of the Facebook community, based on the parameters below, is extremely positive when compared to other competing advertising media:

â€“Recurring Cost: To reach out to the same readers they reached earlier through print, they will need to pay for every new advertisement. InÂ the case of Facebook, itÂ doesnâ€™t cost them any money for a new message.

â€“Engagement Level: The quality and quantity of engagement on Facebook far surpasses the potential engagement opportunity in print. According to the company, they can expect 0.5% to 1.5% of fans to engage with their message on Facebook. In the case of print, if they present an opportunity for readers to respond through an SMS, they can only expect 0.2% as the response rate.

â€“Visibility: In theÂ case of Facebook, they have complete visibility of their audienceâ€™s profiles while they get negligible visibility through print.

â€“Virality: Finally, the opportunity of their existing Facebook fans bringing new fans or influencing other peopleâ€™s decisions toward their brand almost doesnâ€™t exist in the case of print but is exponential on Facebook.

These are smart rules of thumb that can be applied to any business, small or large, while measuring or planning a Facebook presence in a marketing plan.Â I look forward toÂ hearing about anyÂ arguments or models of evaluating Facebook effectiveness for business growth.

This article was originally published at WSJ.